Material of Pharmaceutical Plant Construction , Corrosion and its Prevention 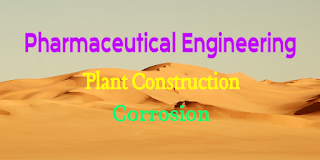 CORROSION AND ITS PREVENTION

EFFECTS OR CONSEQUENCES OF CORROSION:

The economic and social consequences of corrosion include:

Native State: The metals exist as such in the earth crust then the metals are present in a native state.
Native state means free or uncombined state. These metals are non-reactive in nature. They are noble metals which have very good corrosion resistance. Example: Au, Pt, Ag, etc.
Combined State: Except noble metals, all other metals are highly reactive in nature which undergoes reaction with their environment to form stable compounds called ores and minerals. This is the combined state of metals. Example: Fe2O3, ZnO, PbS, CaCO3, etc.

Metallic Corrosion: The metals are extracted from their metallic compounds (ores). During the extraction, ores are reduced to their metallic states by applying energy in the form of various processes. In the pure metallic state, the metals are unstable as they are considered in excited state (higher energy state). Therefore as soon as the metals are extracted from their ores, the reverse process begins and form metallic compounds, which are thermodynamically, stable (lower energy state). Hence, when metals are used in various forms, they are exposed to environment, the exposed metal surface begin to decay (conversion to more stable compound). This is the basic reason for metallic corrosion.

CLASSIFICATION OR THEORIES OF CORROSION

TYPES OF DRY or CHEMICAL CORROSION:

CORROSION BY OXYGEN or OXIDATION CORROSION:

Oxidation Corrosion is brought about by the direct attack of oxygen at low or high temperature on metal surfaces in the absence of moisture. Alkali metals (Li, Na, K etc.,) and alkaline earth metals (Mg, Ca, Sn, etc.,) are rapidly oxidized at low temperature. At high temperature, almost all metals (except Ag, Au and Pt) are oxidized. The reactions of oxidation corrosion are as follows:

2) Oxygen is converted to oxide ion (O2-) due to the transfer of electrons from metal.

3) The overall reaction is of oxide ion reacts with the metal ions to form metal oxide film.

The Nature of the Oxide formed plays an important part in oxidation corrosion process.

When oxidation starts, a thin layer of oxide is formed on the metal surface and the nature of this film decides the further action. If the film is 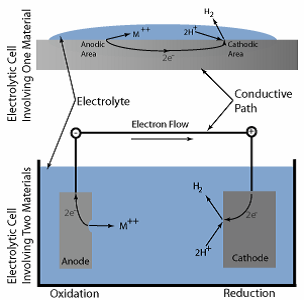 (i) Stable layer:
A Stable layer is fine grained in structure and can get adhered tightly to the parent metal surface. Hence, such layer can be of impervious nature (i.e. which cuts-off penetration of attaching oxygen to the underlying metal). Such a film behaves as protective coating in nature, thereby shielding the metal surface. The oxide films on Al, Sn, Pb, Cu, Pt, etc., are stable, tightly adhering and impervious in nature.
(ii) Unstable oxide layer:
This is formed on the surface of noble metals such as Ag, Au, and Pt. As the metallic state is more stable than oxide, it decomposes back into the metal and oxygen. Hence, oxidation corrosion is not possible with noble metals.
(iii) Volatile oxide layer:
The oxide layer film volatilizes as soon as it is formed. Hence, always a fresh metal surface is available for further attack. This causes continuous corrosion. MoO3 is volatile in nature.
(iv) Porous layer:
The layer having pores or cracks. In such a case, the atmospheric oxygen has access to the underlying surface of metal, through the pores or cracks of the layer, thereby the corrosion continues unobstructed, till the entire metal is completely converted into its oxide.
Pilling-Bedworth rule: According to it “an oxide is protective or non-porous, if the volume of the oxide is at least as great as the volume of the metal from which it is formed”. On the other hand, “if the volume of the oxide is less than the volume of metal, the oxide layer is porous (or non-continuous) and hence, non-protective, because it cannot prevent the access of oxygen to the fresh metal surface below”.
Thus, alkali and alkaline earth metals (like Li, K, Na, Mg) form oxides of volume less than the volume of metals. Consequently, the oxide layer faces stress and strains, thereby developing cracks and pores in its structure. Porous oxide scale permits free access of oxygen to the underlying metal surface (through cracks and pores) for fresh action and thus, corrosion continues non-stop. Metals like Aluminium forms oxide, whose volume is greater than the volume of metal.
Consequently, an extremely tightly-adhering non-porous layer is formed. Due to the absence of any pores or cracks in the oxide film, the rate of oxidation rapidly decreases to zero.

CORROSION BY OTHER GASES (BY HYDROGEN):

1) Hydrogen Embrittlement:Loss in ductility of a material in the presence of hydrogen is known as hydrogen embrittlement .
Mechanism:
This type of corrosion occurs when a metal is exposed to hydrogen environment. Iron liberates atomic hydrogen with hydrogen sulphide in the following way.

Hydrogen diffuses into the metal matrix in this atomic form and gets collected in the voids present inside the metal. Further, diffusion of atomic hydrogen makes them combine with each other and forms hydrogen gas.

Collection of these gases in the voids develops very high pressure, causing cracking or blistering of metal.
2) Decarburization:
The presence of carbon in steel gives sufficient strength to it. But when steel is exposed to hydrogen environment at high temperature, atomic hydrogen is formed.

Atomic hydrogen reacts with the carbon of the steel and produces methane gas.

Hence, the carbon content in steel is decreases. The process of decrease in carbon content in steel is known as decarburization.
Collection of methane gas in the voids of steel develops high pressure, which causes cracking. Thus, steel loses its strength.
3) Liquid metal corrosion:
This is due to chemical action of flowing liquid metal at high temperatures on solid metal or alloy. Such corrosion occurs in devices used for nuclear power. The corrosion reaction involves either: (i) dissolution of a solid metal by a liquid metal or (ii) internal penetration of the liquid metal into the solid metal. Both these modes of corrosion cause weakening of the solid metal.

At cathodic area, reduction reaction takes place (gain of electrons), usually cathode reactions do not affect the cathode, since most metals cannot be further reduced. So at cathodic part, dissolved constituents in the conducting medium accept the electrons to form some ions like OH andO2.

Cathodic reaction consumes electrons with either by

(a) evolution of hydrogen or
(b) absorption of oxygen, depending on the nature of the corrosive environment

All metals above hydrogen in the electrochemical series have a tendency to get dissolved in acidic solution with simultaneous evolution of hydrogen.
It occurs in acidic environment. Consider the example of iron

These electrons flow through the metal, from anode to cathode, where H+ ions of acidic solution are eliminated as hydrogen gas. 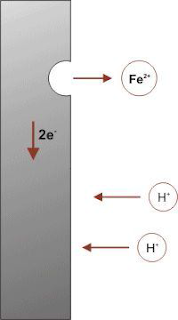 Rusting of iron in neutral aqueous solution of electrolytes (like NaCl solution) in the presence of atmospheric oxygen is a common example of this type of corrosion. The surface of iron is usually coated with a thin film of iron oxide. However, if this iron oxide film develops some cracks, anodic areas are created on the surface; while the well metal parts acts as cathodes.
At Anode: Metal dissolves as ferrous ions with liberation of electrons.

At Cathode: The liberated electrons are intercepted by the dissolved oxygen.

The Fe2+ ions and OH- ions diffuse and when they meet, ferrous hydroxide is precipitated.

(i) If enough oxygen is present, ferrous hydroxide is easily oxidized to ferric hydroxide.

(ii) If the supply of oxygen is limited, the corrosion product may be even black anhydrous magnetite, Fe3O4.

The electrochemical corrosion is classified into the following two types:
(i) Galvanic (or Bimetallic) Corrosion
(ii) Differential aeration or concentration cell corrosion.

Galvanic Corrosion:
When two dissimilar metals (eg. zinc and copper) are electrically connected and exposed to an electrolyte, the metal higher in electrochemical series undergoes corrosion. In this process, the more active metal (with more negative electrode potential) acts as a anode while the less active metal (with less negative electrode potential) acts as cathode.
In the above example, zinc (higher in electrochemical series) forms the anode and is attacked and gets dissolved; whereas copper (lower in electrochemical series or nobler) acts as cathode.
Mechanism: In acidic solution, the corrosion occurs by the hydrogen evolution process; while in neutral or slightly alkaline solution, oxygen absorption occurs. The electron-current flows from the anode metal zinc to the cathode metal, copper.
Zn———————– Zn 2+ + 2e- (Oxidation)

Thus it is evident that the corrosion occurs at the anode metal; while the cathodic part is protected from the attack.
Example: (i) Steel screws in a brass marine hardware
(ii)Lead-antimony solder around copper wise;
(iii) a steel propeller shaft in bronze bearing
(iv) Steel pipe connected to copper plumbing. 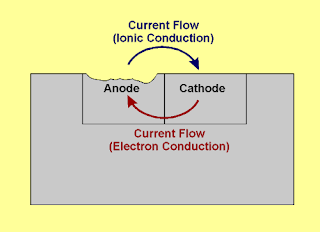 It is due to electrochemical attack on the metal surface, exposed to an electrolyte of varying concentrations or of varying aeration. It occurs when one part of metal is exposed to a different air concentration from the other part. This causes a difference in potential between differently aerated areas. It has been found experimentally that poor-oxygenated parts are anodic.
Examples: i) The metal part immersed in water or in a conducting liquid is called water line corrosion.
ii) The metal part partially buried in soil.
Explanation: If a metal is partially immersed in a conducting solution the metal part above the solution is more aerated and becomes cathodic. The metal part inside the solution is less aerated and thus becomes anodic and suffers corrosion.
At anode: Corrosion occurs (less aerated) M M2+ + 2e-
At cathode: OH- ions are produced (more aerated) ½ O2 + H2O + 2e- 2OH