HKT PGIMS Online Quiz Contest is running 🏆 for Students. Hurry up. Click here to Participate
Skip to content
HTML stands for Hyper Text Markup Language. It is used to design web pages using markup language. HTML is the combination of Hypertext and Markup language. Hypertext defines the link between the web pages. Markup language is used to define the text document within tag which defines the structure of web pages. This language is used to annotate (make notes for the computer) text so that a machine can understand it and manipulate text accordingly. Most of markup (e.g. HTML) languages are human readable. Language uses tags to define what manipulation has to be done on the text.
HTML is a markup language which is used by the browser to manipulate text, images and other content to display it in required format. HTML was created by Tim Berners-Lee in 1991. The first ever version of HTML was HTML 1.0 but the first standard version was HTML 2.0 which was published in 1999.HTML is the standard markup language for creating Web pages.
Elements and Tag: HTML uses predefined tags and elements which tells the browser about content display property. If a tag is not closed then browser applies that effect till end of page. 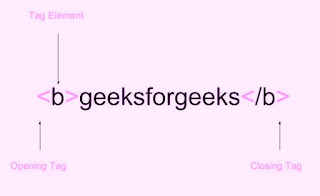 HTML page structure: The Basic structure of HTML page is given below. It contain some elements like head, title, body, … etc. These elements are used to build the blocks of web pages.
<DOCTYPE! html>: This tag is used to tells the HTML version. This currently tells that the version is HTML 5.
<html>: This is called HTML root element and used to wrap all the code.
<head>: Head tag contains metadata, title, page CSS etc. All the HTML elements that can be used inside the <head> element are:
<body>: Body tag is used to enclosed all the data which a web page has from texts to links. All of the content that you see rendered in the browser is contained within this element. 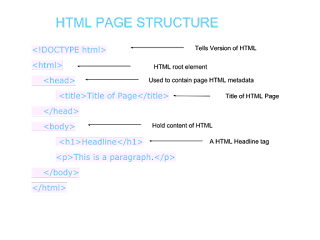 The Difference Between XML and HTML

XML and HTML were designed with different goals:

XML Does Not Use Predefined Tags

The XML language has no predefined tags.
The tags in the example above (like <to> and <from>) are not defined in anything XML standard. These tags are “invented” by the author of the XML document.
HTML works with predefined tags like <p>, <h1>, <table>, etc.
With XML, the author must define both the tags and the document structure.

Many computer systems contain data in incompatible formats. Exchanging data between incompatible systems (or upgraded systems) is a time-consuming task for web developers. Large amounts of data must be converted, and incompatible data is often lost.
XML stores data in plain text format. This provides a software- and hardware-independent way of storing, transporting, and sharing data.
XML also makes it easier to expand or upgrade to new operating systems, new applications, or new browsers, without losing data.
With XML, data can be available to all kinds of “reading machines” like people, computers, voice machines, news feeds, etc.

Cascading Style Sheets, fondly referred to as CSS, is a simply designed language intended to simplify the process of making web pages presentable. CSS allows you to apply styles to web pages. More importantly, CSS enables you to do this independent of the HTML that makes up each web page.
CSS is designed to enable the separation of presentation and content, including layout, colors, and fonts. This separation can improve content accessibility, provide more flexibility and control in the specification of presentation characteristics, enable multiple web pagesto share formatting by specifying the relevant CSS in a separate .css file, and reduce complexity and repetition in the structural content.
Separation of formatting and content also makes it feasible to present the same markup page in different styles for different rendering methods, such as on-screen, in print, by voice (via speech-based browser or screen reader), and on Braille-based tactile devices. CSS also has rules for alternate formatting if the content is accessed on a mobile device.
The name cascading comes from the specified priority scheme to determine which style rule applies if more than one rule matches a particular element. This cascading priority scheme is predictable.
CSS is easy to learn and understood but it provides powerful control over the presentation of an HTML document.

A CSS comprises of style rules that are interpreted by the browser and then applied to the corresponding elements in your document.
A style rule set consists of a selector and declaration block.
The selector points to the HTML element you want to style.

In addition to HTML, other markup languages support the use of CSS including XHTML, plain XML, SVG, and XUL.

Beyond Fifth Generation Languages
Though no clear definition at present, natural language programs generally can be interpreted and executed by the computer with no other action by the user than stating their question.Limited capabilities at present.

FORTRAN
◦ FORmula TRANslation.
◦ Developed at IBM in the mid-1950s.
◦ Designed for scientific and mathematical applications by scientists and engineers.
COBOL
◦ Common Business Oriented Language.
◦ Developed in 1959.
◦ Designed to be common to many different computers.
◦ Typically used for business applications.
BASIC
◦ Beginner’s All-purpose Symbolic Instruction Code.
◦ Developed at Dartmouth College in mid 1960s
◦ Developed as a simple language for students to write programs with which they could interact through terminals.
C
◦ Developed by Bell Laboratories in the early 1970s
◦ Provides control and efficiency of assembly language while having third generation language features.
◦ Often used for system programs.
◦ UNIX is written in C.

Simula ◦ First object-oriented language ◦ Developed by Ole Johan Dahl in the 1960s. Smalltalk ◦ First purely object-oriented language. ◦ Developed by Xerox in mid-1970s. ◦ Still in use on some computers.
C++ ◦ It is C language with additional features. ◦ Widely used for developing system and application software. ◦ Graphical user interfaces can be developed easily with visual programming tools.
 JAVA ◦ An object-oriented language similar to C++ that eliminates lots of C++’s problematic features ◦ Allows a web page developer to create programs for applications, called applets that can be used through a browser. ◦ Objective of JAVA developers is that it be machine, platform and operating system independent.

Scripting Languages:  ◦ JavaScript and VBScript ◦ Php and ASP ◦ Perl and Python
Command Languages :  ◦ sh, csh, bash
Text processing Languages:  ◦ LaTex, PostScript
HTML ◦ HyperText Markup Language. ◦ Used on the Internet and the World Wide Web (WWW). ◦ Web page developer puts brief codes called tags in the page to indicate how the page should be formatted.
 XML ◦ Extensible Markup Language. ◦ A language for defining other languages.

Programming languages comes to mechanics of the task, learning to speak and use a programming language is in many ways like learning to speak a human language. In these languages you have to learn new vocabulary, syntax and semantics (new words, sentence structure and meaning) And both kind of language require considerable practice to make perfect.