When a substance moves away from a solution and adsorbs at the surface of a solid, the concentration of the solute remaining in solution is in dynamic equilibrium with the adsorbed concentration at the surface. This distribution ratio of the solute in solution and at the surface is a measure of the adsorption equilibrium. Adsorption studies using gases generally involve the determination of the amount of gas adsorbed, x, by a given mass, m, of the adsorbent at constant temperature. Determinations are carried out at different equilibrium pressures p (the pressure attained after adsorption) to yield an adsorption isotherm (isotherm refers to a isotherms (isotherm refers to a plot at constant temperature). Based on the IUPAC classification, the isotherm obtained can generally be classified into six types as follows: 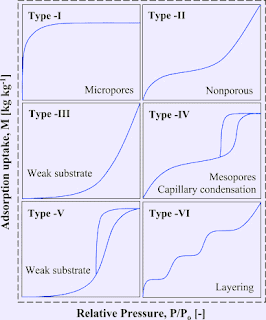 Type I isotherm: Shows a rapid rise in the adsorption with increasing pressure followed by levelling off.

1. Characteristic of chemical adsorption by microporous adsorbents
2. Langmuir type isotherms, adsorption being restricted to monolayer
3. Rapid rise is due to micropore filling at relatively low pressure
4. Levelling off is because chemical groups available for chemisorption get saturated very rapidly (monolayer) Example: adsorption of N, on carbon at 77°K, adsorption of ammonia on charcoal at 273°K.

1. Characteristic of multilayer physical adsorption onto nonporous solids
2. First inflection point is due to the formation of a monolayer
3. As the pressure is increased further, multilayer formation occurs
4. Described by BET equation Example: activated carbons with mixed micro and mesoporosity.

1. Characteristic of adsorption of gases on porous solids
2. First inflection point represents the amount of gas required to form a monolayer on the surface of the solid
3. Further adsorption is due to multilayer formation and capillary condensation within the pores of the solid
4. Limiting value is due to saturation vapour pressure Example: condensation of gases on porous solids.

1. Characteristic of extremely homogeneous, nonporous surfaces where the monolayer capacity corresponds to step height
2. Formation of complete monolayer before each subsequent multilayer commences
3. Shows distinct steps corresponding to the complete formation of each monolayer
Example: adsorption of krypton on carbon black at 90K.