1. What are the assumption of Langmuir adsorption. Give its derivation.

The adsorption of a gas on the solid surface depends on the pressure on the gas in the experimental conditions. At a particular pressure, P
Fraction of sites occupied: θ

Fraction of sites unoccupied: (1-θ)
Rate of adsorption: r1 = k1/(1-θ)P
Rate of desorption: r2 = k2θ
where k1 and k2 are the proportionality constants for the processes of adsorption and desorption, respectively.
At equilibrium: r1 = r2 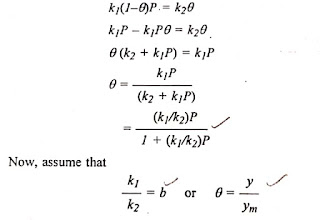 Now, plot of P/y against P gives a straight line and ‘ym‘ and ‘b’ can be obtained from the slope and intercept. The value of ‘ym‘ is used to estimate specific surface of the solids, considering that adsorption is monomolecular layer thickness. As proposed in the assumptions, Langmuir adsorption isotherm is applicable until the monomolecular layer is formed. The agreement of experimental data and theory is poor at low pressures and when pressure approach saturation. This has been attributed to the formation of multilayer adsorption.