HKT PGIMS Prime Competition [Max Prize 🏆 worth ₹1500] for B.Pharmacy Students. Check Result
Skip to content
Some Important Questions from Surface and Interfacial Phenomenon as per B Pharmacy PCI Pattern are:
Questions with Solutions:

1. Who introduced the HLB concept and define HLB scale?

Since several applications are reported, one has to be cautious in the selection of a surfactant. Keeping in view of innumerable number of surfactants are available, selecting a right kind or type of surfactant for intended purpose is a difficult task. Selection by trial and error is costly and impracticable. One empirical selection system is HLB as proposed by Griffin in 1947.
HLB is an arbitrary scale that indicates the extent of hydrophilic lipophilic balance (HLB). Surfactants such as Spans (sorbitan ester) are Lipophilic and have low HLB values (1.8 to 8.6). On the other hand, Tweens (polyoxyethylene derivatives of Spans) are hydrophilic and have high HLB values (9.6 to 16.7). In general, the higher the HLB of an agent, the more the hydrophilicity. A HLB value of one (1) indicates that the surfactant is soluble in oil. a HLB value of 20 implies that it is soluble in water. The HLB scale is used to identify the optimum efficiency of a variety of surfactants.

2. Draw HLB scale with values of various surfactants along with examples. 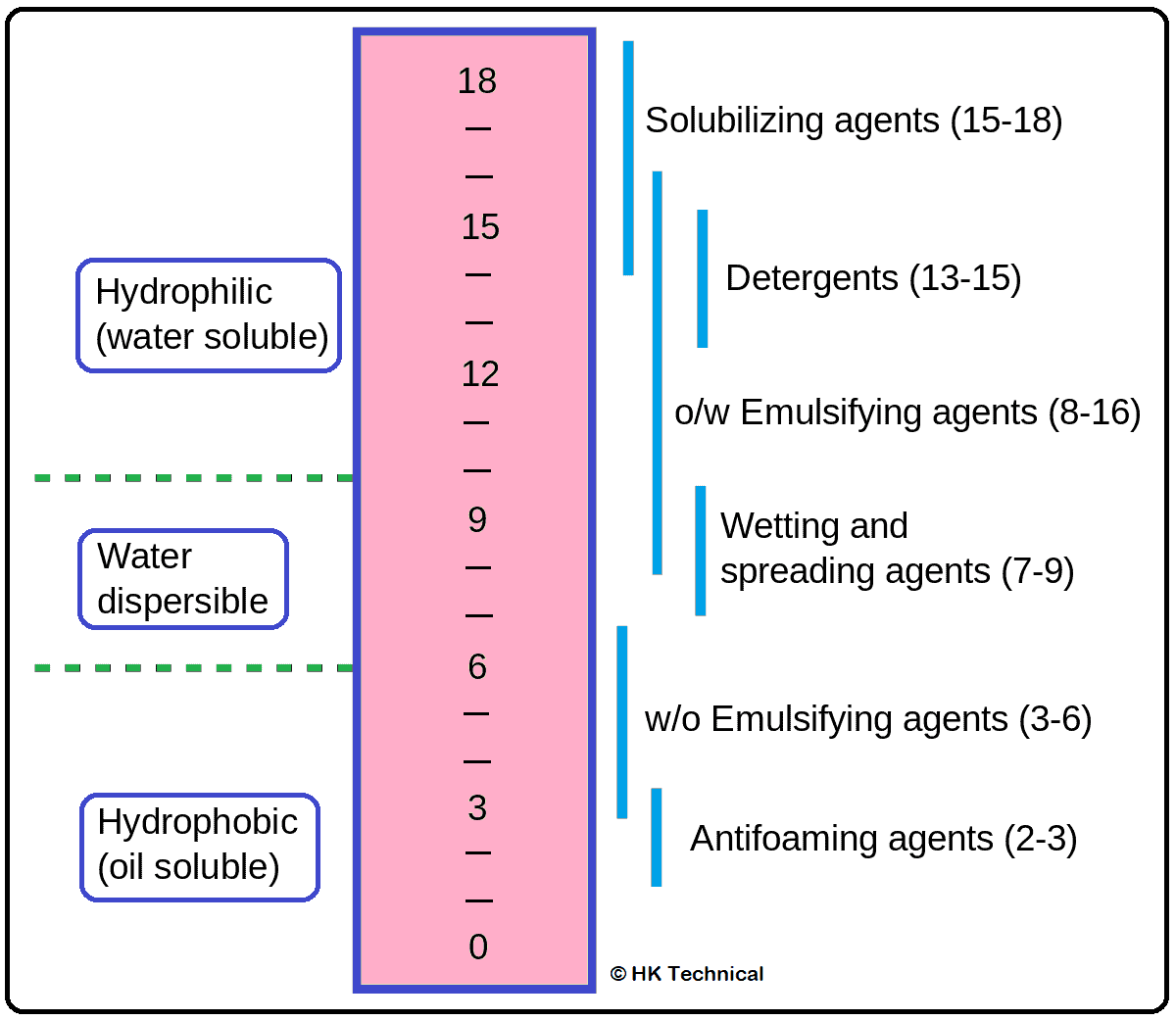 The Calculations of HLB value are as follows:

This means that a surfactant, or blend of surfactants having an HLB of 10 will generally make a more stable & fluid O/W emulsion with mineral oil than surfactants of any other HLB.
Generally, a single emulsifier cannot yield the desired type of emulsion. More often, sable emulsions can be prepared by utilizing a combination of a hydrophilic and a lipophilic surfactant. Such combinations produce mixed interfacial phases of high surface coverage as well as of sufficient viscosity to prevent creaming.
HLB values of combinations of surfactants A (HLBA, and B (HLBB) are calculated by the following equattions:

5. What are the various steps involved in detergency. Explain it with flow chart diagram.

Surfactants in aqueous solutions are used to remove the dirt from substrates such as glass, fabric, skin etc. Effective detergents are required for the cleaning of production equipment, containers for packing and also in order to maintain hygiene in the industry. Detergency is a complex process and a number of steps are simultaneously involved. These are:
The HLB requirement for the detergent is about 13 to 16. Some examples of detergents of ionic type are:
Cationic type :
Zephiran (benzyl dimethyl cetyl ammonium chloride) &
Cetrimide (cetyltrimethyl ammonium chloride)
Anionic Type:
Soaps, Sodium lauryl sulphate.

6. Write a detailed note on HLB and give its two limitations.

Limitations of HLB are: